Affirmative Attitude: Moved by the Grandeur 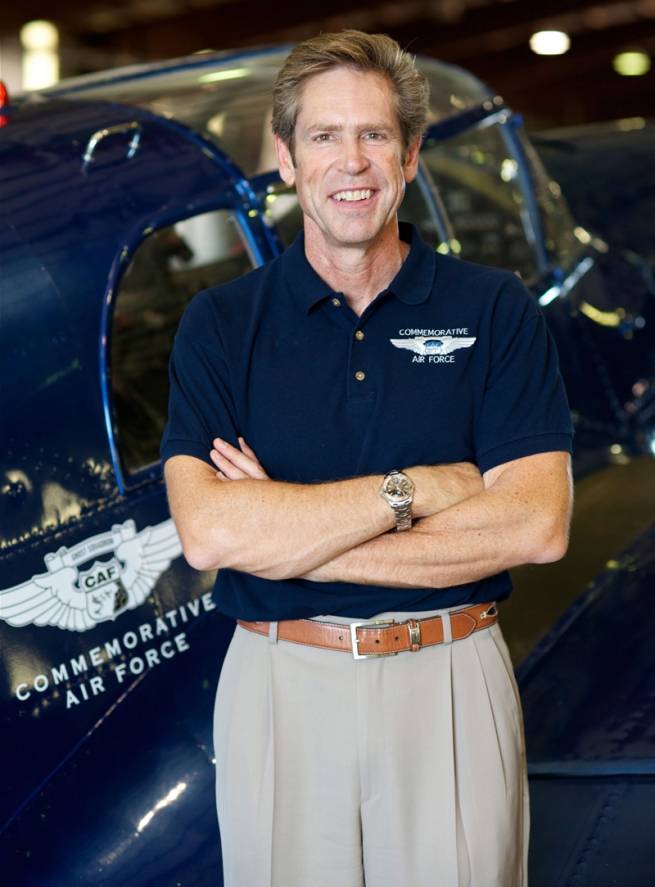 The mission of the Commemorative Air Force is important
to anyone who has ever given even a moment’s thought to the
freedoms we enjoy in this country.

There is something about warbirds that sparks a fire in every aviator’s soul. The sight of their sturdy structure impresses us, while the sound of their powerful engines can almost bring some airplane enthusiasts to tears... especially those who flew these significant machines in combat.

Warbirds always look great in a museum environment: perfectly shiny, not a drop of oil anywhere. You can get close enough to be moved by their grandeur, and really study their every detail. But while the most pristine warbirds in the finest museum exhibit are a sight to behold, those same models in airworthy, “mission-ready” condition are the ones that really come alive.

Fully restored versions regularly fly at airshows all over the world, and the sound of their wonderful round engines is reason enough for many to work on keeping our country’s warbirds in the sky where they belong.

One of the most important organizations enjoying great success at keeping warbirds flying is the Commemorative Air Force (CAF).

“We founded the ‘warbird’ movement over 50 years ago with the idea of preserving, flying and exhibiting these aircraft, and the Flying Museum concept was born,” says Stephan C. Brown, CAF’s president and CEO.

“We feel it is important for the audience to see these aircraft as they were intended—in the air. Seeing them in a static museum is great, but we hope to tell a more complete story by flying them and also providing the opportunity for people to ride in our aircraft through the Living History Flight Experience program. Flying our aircraft is what makes the CAF unique.”

Brown came to the CAF after working for EAA from 1998–2002 as an executive vice-president in marketing. After leaving EAA to start his own business, he found that he loved the aviation industry as much as he liked flying. By 2007, Brown was looking to get back in.

“I contacted David Pasahow, owner of Blue Line Advisors,” Brown explains, “His company focuses on placing aviation executives, so I sent him my resume to see if he had anything that might be a good fit.

“Unknown to me, he had been contracted by the CAF to search for their new CEO. When I read the job description and qualifications, I knew that this job was meant for me, so I aggressively pursued it and was fortunate enough to be selected.”

As a former U.S. Army Captain, Brown’s love of warbirds comes from being an Army Aviator flying UH-1s and OH-58s while serving in Schwäbisch Hall, West Germany. He bought his first airplane in Germany, a Reims Rocket FR172. And while Brown is the CAF leader, he’ll be the first to tell you he is but one part of a very dedicated and much larger team.

“Right now,” says Brown, “I would say that the CAF is at its strongest point in its history. We have over 12,000 total members and 162 aircraft. Our aircraft ‘mission ready rate’ is at 89 percent, and we flew approximately 5,000 fleet hours each of the past two years.

“We have 80 units in 60 locations, across 26 states. The CAF is an amazing organization that attracts passionate people who care about vintage military aircraft and educating Americans on the impact that these airplanes—and the people behind them—had on preserving and protecting our freedoms.

“The teamwork that is exhibited around the country in our units always astounds me! I can’t think of another collection of people that comes together and operates such complex equipment as the CAF.”

The mission of the CAF is important to anyone who has ever given even a moment’s thought to the freedoms we enjoy in this country. Brown sums it up perfectly: “I think the importance of the work CAF performs can be seen every time we land at any airshow in this country. Immediately, a crowd gathers, usually because very few airplanes operate with round engines, and it is this unique sound that should not be lost.

“But more importantly, warbirds are a shining example of what this country can accomplish when we set our mind to it. When war came to us in the attack on Pearl Harbor, our country mobilized from peacetime to a wartime manufacturing footing in an incredibly short timeframe—and our freedom depended upon it.

“As an example, we produced over 17,000 B-17s, but only about a dozen of these aircraft remain. So these airplanes in the CAF fleet—and warbirds in general—remain as a testament to our determination and will… and serve to remind us of what is possible.”

One of the big success stories of the CAF in recent years is that of their Red Tail P-51C Mustang. It is a vivid example of how members of the CAF’s units often join together to do some very important work preserving aviation history.

“We have many, many projects that I could point to with pride,” Brown said, “but the Tuskegee Airmen (TA) Red Tail Mustang is probably the most noteworthy. This aircraft suffered an engine failure in 2004 and the subsequent crash killed pilot and unit leader Don Hinz and destroyed the aircraft.

“The Rise Above program uses a proprietary film about the Tuskegee Airmen, shown on a 160-degree screen within a 53-foot double pop-out tractor trailer. The program uses the TA story to inspire young people—telling them that if the TA can rise above their circumstances of segregation and discrimination, then they can ‘rise above’ their individual circumstance to accomplish their dreams.”

There is also another bright and shining example of the mammoth projects CAF has undertaken and completed. She is big, with a name that might conjure up images of a dancing girl at the Moulin Rouge in Paris. “Our largest and rarest aircraft, our B-29 Superfortess FIFI, is our standard bearer—the queen of the fleet. It is an incredibly complex and expensive aircraft to operate and campaign across the country,” Brown said.

It is that one word—“expensive”—that everyone who loves warbirds should notice, because it takes an incredible amount of money to keep so many of these historically important airplanes flying. Brown is spot-on when he says, “The only thing that is consistent about keeping these aircraft flying is money! Therefore, fund raising is paramount to every unit’s survival.”

Brown continues, “Across the entire CAF, our annual revenues last year were $24 million. And most of the fund raising is done at the grassroots level.”

People who are interested in donating can go to the CAF website and find information on local units, or they can contact Steve Buss to find out how they can help, as CAF has many needs across the country—not all of them financial. (See Resources for contact information. —Ed.)

And if you want to really participate and directly help to keep these airplanes flying, you can always join CAF!

The next time you are on a ramp when one of CAF’s airplanes fires up, think about the thousands of hours of work that some volunteer put in just so you can enjoy that moment. Every CAF member plays an important role in keeping such rare airplanes flying, and for that, they need the support of every aviator at every level of aviation.

Because if the CAF were ever allowed to go away, it could be a death sentence for those glorious round engines that produce the throaty rumble we all crave.