Affirmative Attitude: A Part of Our History That Must Never Be Forgotten 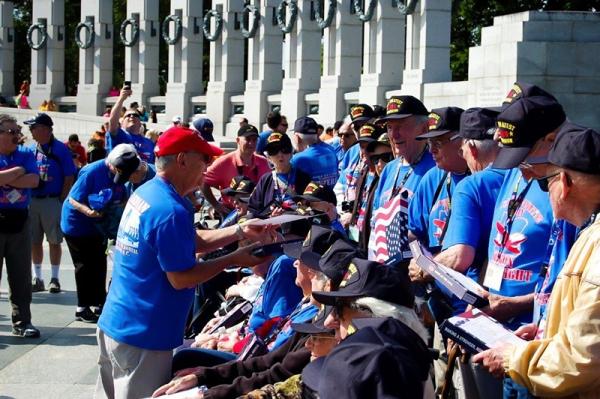 The sky is filled with aviators doing great things with their airplanes, advocating for General Aviation and volunteering to give back to a community that has given them so much. In my quest to seek out subjects for this column, I occasionally find a person who is doing something extraordinary to help others while not flying an airplane to accomplish the task.

This month, I'm going a bit off-script in order to bring attention to someone who is doing incredible work to honor veterans of World War II, among them military pilots who flew in the United States Army Air Forces and with the U.S. Navy in the Pacific Theater of Operations.

Mike Pungercar, director of South Willamette Valley Honor Flight in Springfield, Ore., is not a pilot—but his father was a radio operator on B-17s during World War II, so Pungercar grew up with a great deal of respect for military airplanes and the brave flyers who rode them into battle.

"The Honor Flight Network's mission," Pungercar said, "is to get our country's senior veterans to Washington D.C. free of charge to receive recognition and thank them for their service. Priority is given to World War II veterans, then to Korean War veterans, and then to Vietnam War veterans. We take any terminally ill veterans on the next available Honor Flight.

"Most of these aging veterans never received any thanks for their service 60 to 70 years ago," Pungercar continued. "Our time to honor our World War II veterans is running short."

"I enjoy the company of all of our World War II veterans on an Honor Flight, but those who flew for and served with the Air Force hold a special place in my heart."
Pungercar's work as director for his Honor Flight hub in Oregon began during his research on "The Promise Kept," his 2011 book describing what the men who flew in bombers high above the German battlefield had really experienced.
"While working on the book," Pungercar explained, "I met a World War II veteran in Wisconsin who shared his experience on an Honor Flight; my aha moment came when I was introduced to Bob Maxwell, a World War II Army communications [specialist] and recipient of the Medal of Honor.

"After spending time with Bob, and having met other World War II veterans during my book research, I decided to get involved with the Honor Flight program and try to honor as many of these veterans as I could. In November 2011 I started making contacts around the state, and ended up forming the South Willamette Valley Honor Flight hub in March 2012."

Today, if you see Pungercar working with a sense of urgency, there is a very good reason. "The Greatest Generation," as they are frequently called, are not getting any younger. Several hundred World War II veterans die every day.

The work of flying veterans to Washington to see the memorials is hard, and the hours are long. For each Honor Flight, Pungercar and his team of other volunteers start working six to seven months in advance.

Along with negotiating the best possible rates with Southwest Airlines, securing about 100 round-trip tickets and arranging ground transportation, the team also obtains hotel rooms in the departure city of Portland, Ore., and rooms in Dulles, Va.

In addition, there is a very, very long list of behind-the-scenes work that is completed before the flight ever departs. "We first phone veterans on our waiting list to fill openings on the flight and arrange for their guardians to help with pushing wheelchairs and help them with their medications," Pungercar said.

"There are many details that go into a flight, like lining up 500 bottles of water and contacting our local congressional representatives so we can present United States flags flown over the Capitol in D.C. to each veteran.

"We also furnish every vet and guardian with our hub's Honor Flight shirt; lanyards from Navy, Army, Air Force, Coast Guard and Marine Corps recruiting offices (for our name tags); and [supply] ball caps for each veteran identifying them as a World War II or Korean War veteran."
A major part of the planning for each flight is to make reservations for viewing the Changing of the Guard at the Tomb of the Unknowns in Arlington National Cemetery. This requires bus passes and making reservations, if possible, for representatives from the group to participate in a wreath laying ceremony at the Tomb.

For anyone who has flown commercially in a post-9/11 world, you know the drill regarding security, but you may not know that these Honor Flights get a little help from TSA at the departure airport.

"At PDX," Pungercar explained, "TSA personnel escort us to the security screening area and open at least one separate line for our group. With 25 to 30 wheelchairs and walkers typically in use [and] senior citizens with metal implants—some still carrying shrapnel from 70 years back—screening is a slow but steady process."

If this all sounds like a lot of work, it is. But the rewards for those who make it happen are priceless, said Pungercar. "On the first Honor Flight I led, we were at the Tomb of the Unknowns and had witnessed the Changing of the Guard and a wreath laying ceremony.

"I looked around at the veterans as 'Taps' was being played. Most had removed their hats and were standing or sitting erect and saluting—and, like me, had tears in their eyes. I knew in my heart that what I was doing was making a difference for these men and women who—like my dad—had helped save our country with their service in World War II.

"I have had the privilege of having this experience six times, and will never forget any of them," he continued. "When I see these veterans being thanked by total strangers for serving our country, I feel very humble, knowing that what I am doing is helping to make it possible.

"This is a very powerful and emotional experience for everyone. The stories these men and women have are a part of our history—and what they did for our nation, and for the world, must never be forgotten," Pungercar said.
South Willamette Honor Flights is always seeking donations to make sure more veterans are honored. If you would like to make a contribution, visit the website and click the Donations link.

Pungercar's book has 310 pages with over 200 photos and is available at Amazon.com and from the publisher. Signed copies of "The Promise Kept" are available from the author via email. (See Resources for links. —Ed.)

"The Promise Kept"
by Mike Pungercar
outskirtspress.com
Order a signed copy
by email: