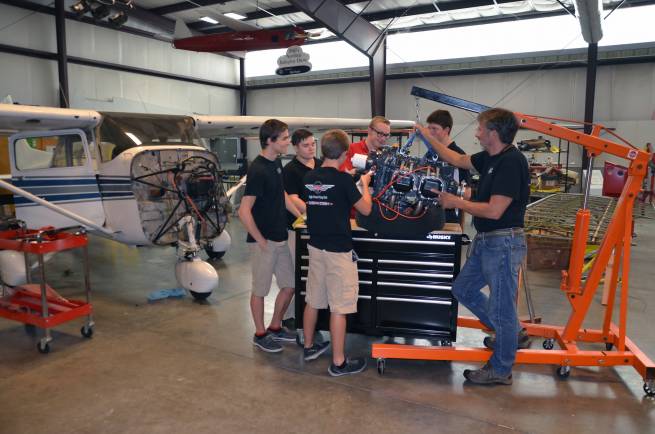 Life as we know it is a series of lessons, and from the day we are born until we take our final breath, we never stop learning.

We are constantly challenged by distractions, temptations and pressures, and the earlier a person can develop the mental fortitude required to meet these roadblocks head-on and fight through them, the better off they’ll be.

Life lessons that teach right from wrong and how to make smart decisions are things that all parents try to teach their teenaged children, but sometimes the teens need to get involved in something they truly love to confirm for themselves the importance of possessing solid character.

As Michael Zidziunas and the Lakeland Aero Club are demonstrating, there might be no better place for teenagers and young adults to learn important life lessons than in a hangar with a tool in your hand, working on your airplane—or better yet, at the controls of that same airplane.

Zidziunas is an A&P/IA with over 3,000 hours, including 1,200 in tailwheel airplanes. He’s built four experimental airplanes, restored a couple of vintage light planes and currently owns and flies a 1939 Taylorcraft BL-65.

Zidziunas has flown 13 trips to the Bahamas in light-sport airplanes, landing at almost every airport on the island chain. He’s learned a lot on his life’s journey—one that has taken him from washing “perfectly clean airplanes” at age 16 in Shawnee Mission, Kan. to earn money for flight lessons, to today as the director of the Lakeland Aero Club.

How Zidziunas ended up mentoring and teaching the students in the club has been a rewarding progression. “I was operating Breezer Aircraft USA, importers of the Breezer Aircraft from Germany,” he explains, “and got a call from 16-year-old Phillip Herrington, who had received a partial scholarship from the Central Florida Aerospace Academy Foundation (CFAAF) to get his sport pilot license.

“He was attending CFAA [Central Florida Aerospace Academy], the new high school located on the Sun ‘n Fun convention campus. There were a small number of students there receiving scholarships for flight training, and through meeting him and fellow students, I learned about the newly-formed Lakeland Aero Club.”

Zidziunas continues, “The club had been founded by longtime youth aviation supporter Rick Garcia of Gulf Coast Avionics, at the suggestion of James Ray. At the time, none of the scholarship recipients had obtained their tickets yet, and the club was being led by one of the teachers from CFAA, who was not a pilot.” (B-17 pilot James C. Ray flew 30 missions in World War II and has thousands of hours piloting as a civilian. CFAAF administers the James C. Ray Scholarship Fund. —Ed.)

“The club meetings had guest speakers and programs designed to get kids interested in aviation,” he said, “but I saw there were already a number of clubs and organizations already doing that, and felt that what was needed was a next step—a place where interested teens could start moving toward making their aviation dreams come true by getting directly involved in aviation.”

With the need identified, Zidziunas began volunteering his time and airplanes to teach formation training, which led to a precision formation flying team of between two and four student-flown LSAs that performed at Sun ‘n Fun, the Sebring Sport Aviation Expo, and even at EAA AirVenture in 2013.

Zidziunas’ involvement in the Lakeland Aero Club ramped up when the club was given a Piper L-18C project and he began volunteering to supervise the restoration after school and on weekends.

By AirVenture 2014, when the Lakeland Aero Club made its second trip to Oshkosh, 25 students had obtained their private pilot certificates and membership had swelled to over 40. It was at that time Zidziunas was asked to take on a full-time position, setting a goal of making the club completely self-sufficient within five years.

With the club designated as a not-for-profit 501(c)(3), it receives most of its funding through donations, and when you look at what Zidziunas and a small army of volunteers is doing, it can only be called remarkable. (If you’re interested in learning more or donating, see Resources at the end of this column. —Ed.)

“Much has been written about the pilot shortage,” Zidziunas says, “but little is being done to do anything about it. The intention of the Lakeland Aero Club is to try to get the cost of flight training and time-building lowered through the club environment.

“The young members of the club own the airplane—one they have restored with their own hands.

“They understand what it means to own something and to take care of it. They have flown it across the country to Oshkosh and back. That takes personal responsibility and discipline,” he explains.

“Coming to those realizations at an early age will serve the students well throughout their lives in everything they do,” he adds.

“The tremendous pride of ownership manifests itself in many interesting ways. The [members] take care of it; they make sure it’s properly secured at night and they are very protective of who touches it, moves it and flies it,” explains Zidziunas.

Being involved in the club teaches new skills to the students, and it also allows them to put classroom lessons to use in real life. “Learning to fly, restoring an airplane—and flying it to Oshkosh—are all things most people don’t do in a lifetime,” Zidziunas said. “These students have done this before graduating high school.

“The experiences they have in the club give purpose to many of the things they learned in school. Things like math become very real and important when planning a cross-country flight; it’s no longer just a problem on the blackboard. That change in perspective helps them to become better students.”

In order to become a member in the Lakeland Aero Club, a student must be under the age of 25; be a pilot (or be enrolled in flight training) or be enrolled in the A&P track at CFAA. They must maintain a minimum GPA of 2.75 and meet the club’s attendance and community service requirements.

Being a club member who happens to own an airplane in high school has additional benefits. “When these students take their girlfriends out for ice cream,” says Zidziunas, “they usually fly over to Crystal River [Fla.], where there is a Dairy Queen right on the airport.”

While not the sole intention of the Lakeland Aero Club, membership has one very important side benefit: “One of the club’s goals is to get young people involved in aviation before they get distracted by things like drugs and alcohol.”

Zidziunas explains, “Young people are anxious to prove themselves and to belong. By getting involved, hands-on, in the hangar and in the cockpit, they see real progress toward their goals. Who needs to get high on drugs when you can get really high in an airplane?”

Zidziunas makes a point to teach the club student members about being proud citizens, too. “Flying low and slow across this great country at 1,000 feet, one really gets to see how fortunate we are to live in America,” he says.

“As towns with flags fluttering in the breeze slide by just as they did in the past, the students come away with a better perspective of how great America really is.” That’s one more big life lesson learned.