This Service Instruction identifies a new 4 psi flow divider spring Precision P/N 2577011 that is available as a replacement for the 2 psi flow divider spring for improved idle characteristics, especially in hot weather, for Lycoming engine models IO-360-L2A, IO-540-AB1A5, IO-540-AC1A5, and TIO-540-AJ1A. This Service Instruction is NOT a substitute for adjusting the fuel system and idle RPM. A check of the fuel adjustment must be done after the spring is installed.

This letter responds to your request for legal interpretation sent to my office on May 19, 2014, on behalf of your client, AirPooler, Inc. As set forth in the request for legal interpretation, you have described AirPooler as "a peer-to-peer general aviation flight sharing company that has developed an interest-based discovery platform that allows private pilots to offer available space on flights that they are intending to take."

We are adopting a new airworthiness directive (AD) for certain Rockwell Collins TDR-94 and TDR-94D Mode select (S) transponders that are installed on airplanes. 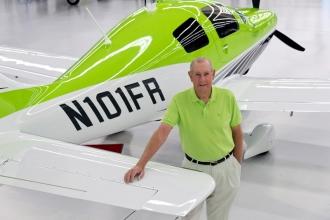 (MEDFORD, OR) August 28, 2014- The challenge of flying a private "general aviation" airplane to all 49 state capitals in the "lower 48" plus Alaska in just two weeks is one that most private pilots would never accept. It is however, the flight plan for an inspiring journey being attempted by two veteran pilots to raise public awareness about smaller, "municipal" airports that are an important business asset for cities and can be a gateway for bringing new tourism traffic into the area. Called the Capital Air Tour, the flight will be flown by Field Morey, an FAA-Certified Flight Instructor from Medford, Oregon, and Conrad Teitell of Greenwich, Connecticut, an attorney with the law firm, Cummings & Lockwood. The pilots will use Morey's 2013 Cessna Corvalis TTx fourpassenger airplane for the flight, departing Tuesday, September 16th, 2014 and landing in several states each day. Along the Capital Air Tour route, Morey and Teitell plan media availabilities in cities where that day's series of flights concludes. They will be distributing information from the Aircraft Owners and Pilots Association to help demonstrate the value of local airports, while allowing electronic and print media reporters to get a close-up look at the airplane being used for the flight.

Morey said that their flight plan is subject to diversions caused by unsafe weather situations. "September is the heart of hurricane season and that could be the biggest influence on our route," he said. "A major route decision will be made prior to leaving Wisconsin on September 20th as we prepare to continue east. The remaining route of our flight plan will all depend on the weather moving up through the Gulf States along the Atlantic coast at the time." The idea of flying the Capital Air Tour came to Teitell when he wanted to "raise the bar" after he and Morey completed Teitell's quest to fly from the highest airport in the U.S. to the lowest airport in 2013. "It was Conrad's idea to land at every state capital in the lower 48 and Alaska," Morey explained, "but I thought we should do it all in two weeks to show just how capable and technologically-advanced a modern private airplane can be."

An unexpected development occurred when Morey spoke with an elementary school teacher about the Capital Air Tour. Because the entire flight will be tracked using an on-board Spot Generation 3 GPS tracking device showing the real-time location of the Corvalis TTx, the flights offer teachers a chance to give lessons in time, distance and U.S. state capitals. A complete itinerary with tentative schedule, along with the tracking map, is available for the public to follow on the Morey's web site at www.ifrwest.com/cat.

Morey is an expert in adventure flights, as he has instructed hundreds of instrument flight students on exciting "real world weather" flights to Alaska, the Rocky Mountains and the Idaho backcountry through his company, Morey's West Coast Adventures (http://www.ifrwest.com). One of those students, Dr. Oliver Smithies, when accepting the Nobel Prize for Genetics, said "Field taught me a lesson very important in the sciences, that you can overcome fear with knowledge." "The Cessna Corvalis TTx is the fastest single-engine, fixed gear production aircraft on the market," Morey said, "and has a maximum cruising speed of 235 knots. With that level of performance, we are able to plan a mission profile for the Capital Air Tour that involves covering over 12,000 miles with stops at 57 airports in two weeks." The airplane to be used on the Capital Air Tour is nicknamed "The Green Hornet," and is equipped with a Garmin G2000 "glass cockpit" panel that includes NEXRAD radar for storm avoidance, anti-ice equipment, and terrain and traffic avoidance devices, along with the latest autopilot technology essential for avoiding crew fatigue.
For more information, or to arrange media interviews at one of the Capital Air Tour's final stops each day, contact Julie Pimentel at 541-344-2308 or or visit ifrwest.com/cat. 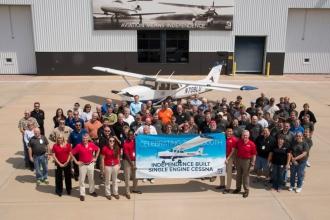 The Independence team and Liberty University representatives marked the occasion with a delivery ceremony of the three Cessna Skyhawks, with one carrying a custom paint scheme displaying its position as the 10,000th Independence-delivered single-engine aircraft.

"Through the years we have developed a great relationship with the team here in Independence and continue to choose Cessna products because we trust the craftsmanship that goes into each one of their aircraft. The Skyhawk is the mainstay to the quality flight training we provide to America's next generation of professional pilots," said USAF retired, Brigadier General Dave Young, Assistant Provost for Aeronautics Education at Liberty University.

The Cessna Skyhawk has become the global standard training platform and has earned a reputation for offering the best combination of modern features, including the G1000 avionics system, and proven dependability. There are more Skyhawks in the world than any other type of aircraft, with more than 48,000 having been designed, manufactured and delivered since 1955, first from Wichita, now from the facility in Independence.

Since its first single engine delivery in June 1996, the Independence facility now produces the majority of Cessna single-engine piston products, including the Skyhawk, Turbo Skylane JT-A, Stationair, TTx , as well as two Citation jets– the Mustang and the M2. Textron Aviation also has its Garmin avionics training center in Independence.

The Liberty University School of Aeronautics has grown from four students and is currently the largest faith-based university aviation program in the country. The school offers a variety of online and residential programs, including a bachelor's degree with concentrations in military aviation, missionary aviation, commercial/corporate aviation, and Unmanned Aircraft Systems (UAS). They are also the owner of Freedom Aviation, the Fixed Based Operator (FBO) located at the Lynchburg, VA airport.

Here are the slides from the FreeFlight Systems presentation at the 10th Annual Gathering at Waupaca, July 27, 2014.

Check out www.adsbuniversity.com for more information about ADS-B.