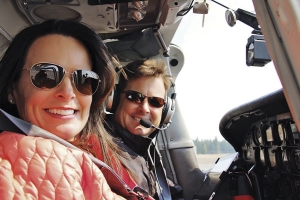 Through well-produced YouTube videos, Doug and Denise Winston show just how much fun you can have when flying your own airplane.

We all know life can be a lot like a game of “Chutes and Ladders,” where one minute we are climbing for the sky, and the next, we are sliding into chaos. Every person reading this has had to overcome some level of adversity, and many of us have been challenged to push on when others would have given up.

I’m currently reading “Never Broken: Songs are Only Half the Story” by Jewel Kilcher, the wildly successful singer-songwriter who has endured decades of struggle to achieve her dream. Jewel’s records have topped the charts and her sweet voice has won her awards, but she would still be living in her car in San Diego if not for a strong instinct to survive anything that came her way.

Kilcher writes in her autobiography that we must dig deep to pull out every last shred of self-motivation and continue chasing our dreams until they are truly fulfilled. For Jewel, life’s major challenges were merely bumps in the road.

In October 2014, Doug and Denise Winston of Bakersfield, Calif. experienced one of these major challenges. Doug has logged about 2,300 hours since earning his ticket in 1985 and has owned five airplanes.

A significant portion of his flights were as a volunteer, using his beloved Cessna 210, N234SS, to fly for Wounded Warrior Project, Veterans Airlift Command, pet rescues or donating flights for Boys & Girls Clubs of America.

Yet, the Winstons’ volunteer flying could have abruptly ended after Doug received the kind of call that nobody wants to take.

“Our Cessna 210 was in annual inspection,” Doug explained, “when I received a call from the Air Force Rescue Coordination Center at Tyndall AFB in Florida informing me that my new 406 MHz ELT had been activated.

“I let them know the plane was in maintenance and gave them the phone number for the maintenance facility, thinking it was an accidental activation of the ELT that we all read about. I left a message at the shop, but was not able to talk them until the next day.”

But this was no accidental activation.

“The next day when I could get in touch with the shop,” Doug continued, “after a very long pause on the phone, the owner of the facility told me that my plane was gone, burned to the ground in a hangar fire.

“After questioning him on what happened and asking if anyone was hurt, I did an internet search for the airport where the plane was located and sure enough, there was news video, pictures and articles about a big hangar fire the prior day,” he explained.

“This is something you never want to hear—it was akin to losing a close friend.”

The fire occurred when the pilot-side fuel tank was being emptied to perform an AD. It was draining into a 55-gallon drum on metal wheels via a large funnel.

The mechanic noticed that a dribble of fuel on the underside of the wing was making its way toward the open cockpit door. He wiped it with a cotton rag, and static electricity ignited the fuel, the rag, the mechanic’s hand, and then the stream of fuel into the barrel.

“Everyone ran for fire extinguishers,” Doug recalled, “and the mechanic grabbed the barrel and began dragging it out of the hangar.

“This was a mistake as the flaming fuel was now spreading in a large puddle on the floor. They had every fire extinguisher in the building spraying the flames, but once they were spent, the interior of the plane ignited from the heat, and fire consumed the plane.

“The airport fire truck arrived quickly, but it was too late.”

Denise was out of town on business and when she heard the tone of Doug’s voice on the phone, she knew something was wrong. “He said, ‘The plane is totally destroyed,’” Denise remembered, “then proceeded to walk me though what happened.

“I felt a pit in my stomach,” she continued. “This plane has taken us to incredible places; provided so much joy and memories for those who flew with us. When I got home, our friends came over with a plaque that said ‘Final Flight Following Request for N234SS’ with a beautiful picture of the plane.

“It made me realize how lucky we are to be able to do the things we do! General Aviation is an incredible lifestyle that not many get to experience.”

With Four-Sierra-Sierra destroyed, the Winstons could have packed it in as aviation volunteers. But anyone who knows them will confirm that quitting was not an option. The Winstons get extraordinary satisfaction out of their volunteer flights, and nothing was going to take that away from them.

Doug’s inspiration for giving back comes from Denise, a successful financial expert, author and motivational speaker. “Doug has heard me asking my audiences three questions: ‘What are you good at?’ ‘What do you love to do?’ and ‘How can you be most helpful?’

“Anyone can write a check,” Denise explained, “But using your time, talent and resources are much more valuable, and you get to see where 100 percent of your donation goes, in the smiles of your passengers, or a wet-nose nudge from a pup.

“Doug is using his pilot’s license, plane, time and cash for a purpose—and for me, it’s using my video skills to create a lasting experience for those who fly with us, and to promote the GA lifestyle.”

Denise honed her video skills while working on a financial education DVD series. She purchased a variety of video and sound equipment, and learned the craft by working with professional videographers and editors.

Wanting to literally “get on board” with Doug’s GA advocacy, she asked herself those same three questions: “What am I good at?” “What do I love to do?” and “How can I be most helpful?”

She documented a flight from San Diego to Mammoth Lakes, Calif. during a Veterans Airlift Command flight for her first video, and realized both she and Doug enjoyed sharing the General Aviation experience.

Together they began producing GA-based travel videos to promote the convenience, fun and adventure of traveling in their flying machine. “We are trying to do our part in public relations for GA, and want to recruit more pilots since the population of flyers has been dwindling over the years.

“We have gotten emails from some aspiring pilots who watched our videos, so we know it works,” Denise said.

The Winstons’ YouTube channel shows just how much fun you can have when flying your own airplane. It’s a large selection of short videos with good production value, combining great travel scenes and in-flight footage with Denise’s smooth on-camera persona.

Now about that destroyed airplane. There was never any hesitation by the Winstons in looking for a new plane.

“We had to get back to doing our flying thing,” Doug said. “I was upset and sad, but what better way to make myself feel better than some airplane shopping therapy?

“In the weeks that followed, we located a beautiful 1970 Cessna T210 before it came up for sale at the same FBO where we kept our plane. The seller heard our story, and we heard his—that his prior plane, a Skylane, burned in a mysterious fire at a private airport.

Doug and Denise Winston are back in the air now, doing what they love, helping others with their airplane—and filming it all for our enjoyment. You can never keep these kinds of generous people down for long.

Further reading
“Never Broken: Songs are
Only Half the Story”